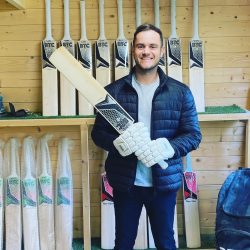 Supporting this new initiative, the Bears are proud to be able to announce the arrival of a player/coach in the form of Alex Lear.  Born and bred in Bath, Alex started his cricketing career at the age of  5, inspired by watching his father play for Combe Down CC, which was a huge influence in his decision to play cricket as opposed to other sports.  He joined Hampsett CC at the age of 9 where his talent was spotted and coached, reaching the dizzy heights of the first team at the tender age of 15, where he opened the bowling.  He remained there as a player until 2011, when he was approached by Midsomer Norton CC.  Under the watchful eye of MSN academy coach and Gloucestershire cricketer Rob Cunliffe, untapped promise in Alex’s batting skills was recognised and nurtured and soon he was their opening bat.  He played for MSN for eight seasons until 2019, during which time the club was promoted twice, and his person best was three WEPL 100s.  He played against county and international cricketers at MSN and during that time, and broke into the MCC as a playing member,  playing for two seasons.

In 2019 Alex returned to Hampsett to help them improve their standard of cricket as a player/coach.  It was not to be as covid then hit and things ground to a halt.

In January 2022 the Bears advertised for a player/coach.  The new Saturday 2XI and the freshly implemented Bear Cubs programme intimated to Alex that the Bears were a club with aspirations to go places.  He met with club captain Mark Gunning and Saturday 1XI vice-captain Ross Newman, and was impressed by their commitment and enthusiasm to take the club forward into a higher standard of cricket.  He saw the development plan of the Bears was aligned with his values and ethos,  and believed this was a club where he could truly add value.  That, and the combination of the excellent glasshouse facilities was enough for him to decide he would like to come on the Bears journey.  The scene was set, he signed on the line, and the rest, as they say, is history.

Alex’s vision for the 2022 season for the 1XI is clear.  Through coaching on and off the pitch, midweek training, indoor and outdoor nets, and a playing commitment to the Saturday 1XI, he believes promotion this season is achievable.  He sees a tight knit bunch of guys, working together towards the same goal, individuals who understand their role within the team, and a commitment to being the best they can be.

It has been said many times before, but there surely is no better time to be a Bear.